U.S. Supreme Court Justice Clarence Thomas recently made the headlines in both the ABA Journal and Law 360 for using what both publications termed a "rogue" Supreme Court citation in the opinion he wrote for Brownback v. King, 141 S.Ct. 740 (Legal Writing Professors take note).
The ABA Journal says that Justice Thomas "went rogue on the Bluebook when he embraced an appellate lawyer’s suggestion for dealing with 'citation baggage'... that distracts from the point."
What was this bold move? Justice Thomas used the suggestion to used the parenthetical "(cleaned up)" after a citation to denote the court's omission of quotations within quotations and the need for a quoting citation parenthetical, as dictated by Bluebook Rule 5.2. The appellate lawyer who made the suggestion in an SSRN article is Jack Metzler of the Federal Trade Commission. Metzler told the ABA Journal that this is a big deal, "at least in the world of legal citation." 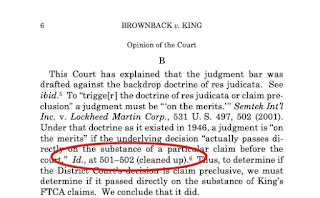