The CB I Hate Perfume website (from a guy who hates perfume, at least brand name perfumes) offers a scent called "In the Library" capturing "the scent of books and of the libraries where they live." As CB says,    "There are few things more wonderful than the smell of a much-loved book."
Available as perfume, home spray, and "water perfume".
No comments: Links to this post

ebrary E-books Can Now Be Downloaded

The Pitt University Library System has announced that Ebrary has made their e-book collection downloadable for Pitt users. ULS has turned this feature "on" for all titles for which we have multiple user access. This includes all of the titles in our Academic Complete subscription as well as those individual titles that we have purchased with a multiple user license.
There are two download options. You can convert a book chapter (or page range) to pdf format OR you can download the full book using Adobe Digital Editions software (free download).  The books can be read with this software or transferred to compatible devices (Kindles are not compatible.) You then have access to the ebook for 14 days.  Note that there are some titles for which the full download option is not available; note also that you have to create an ebrary account to download material.
No comments: Links to this post

There is a new website called www.BarReciprocity.com that was created to help users navigate the convoluted process of attorney bar admission.  The site  collects and organizes  information about bar exams, bar admissions,  and reciprocity  for the entire United States. It has an interactive map to help navigate the information for individual states.  The site  includes information on special licenses for special attorney categories such as Military Attorneys, law professors, and students; it also provides the pro hac vice rules and procedures (allowing attorneys to practice law in a particular proceeding in a jurisdiction where the attorney is not admitted) for all the states.

Business Week reports that the United States Dept. of Justice has confirmed that it is investigating the pricing of electronic books  to look at whether there was improper collusion by Apple and publishers to prevent discounting.  This comes after the EU announced on Tuesday that it is investigating possible anticompetitive practices between Apple and five major publishers, including France's Hachette Livre, German-owned Macmillan, U.K. publisher Penguin, and U.S.-based Harper Collins and Simon & Schuster.
No comments: Links to this post

TRAC webinar on "ICE Charging Practices in the Immigration Courts"

TRAC is offering a webinar on Weds. Dec. 7 at 2:00 p.m. on "Monitoring ICE charging practices in the Immigration Court". The webinar will include a short (approximately 15-20 minute) overview and demonstration of TRAC's newly released web monitoring tools for immigration courts, followed by a question and answer session. If you would like to join the webinar, please email TRAC.
No comments: Links to this post

Transactional Records Access Clearinghouse (TRAC) is a non-partisan research organization associated with Syracuse University. TRAC from has prepared a report on deportation proceedings in US immigration courts, with accompanying data tools which allow tracking by charge, nationality, and specific location. TRAC's findings, based upon very recent case-by-case data obtained under the Freedom of Information Act from Immigration Court files, appear to contrast with the White House's announcement that under the President's direction DHS during the past year has prioritized the removal of people who have been convicted of crimes in the United States. The data shows that in ICE-initiated Immigration Court deportation proceedings during July-September 2011, only 7,378 individuals or 13.8 percent of the total were charged with having engaged in criminal activities. The proportion of alleged "criminals" of those targeted is down significantly from the already low level of 16.5 percent during FY 2010, and has been declining steadily throughout the past year.

Want to know what plane is flying overhead?

CNET has a story about a feature that can be used with the iPhone 4S Siri app (Siri is a voice-activated assistant app built into the phone's operating system that allows users to interact with the iPhone 4S by voice). According to the article, if you tell your iPhone "Ask Wolfram what flights are overhead" it will retrieve the information and tell you the overhead airline(s), flight numbers, and altitude.
Wolfram is the database that does dynamic computations on a wide range of web-based objective data. 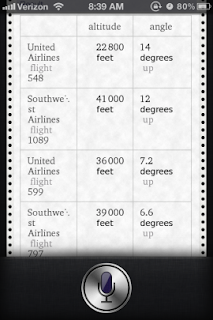 hat tip Ryan Vandegrift
No comments: Links to this post