Slaw has an interesting post titled "Typography and Legal Information" that talks about how law looks - i.e. how font style and size affects readability. Apparently the typography and style used for the Canadian statutes online was changed this year, according to an announcement on the Canadian government website. The author says that "Studies that show typography affects retention of information and perception of the quality of information," and notes that one study found that readers who read a statement in Baskerville font "were more likely to agree with it."
And if you are fascinated by typography you might also enjoy this article from Vox Almanac that tells the history of Wingdings fonts.
No comments:

To commemorate the 15th anniversary of the 9/11 attacks, the U.S. Center for Homeland Defense and Security has assembled a digital collection to honor those who lost their lives, remember important lessons learned, recognize progress in protecting our communities, celebrate the dedication of public safety officials, and challenge leaders to think critically about the future of homeland security. The collection includes reflective essays, recorded audio personal stories, and a collection of key 9/11-related resources published since 2001.
No comments:

HeinOnline has announced that they recently added over 120 titles from the University of North Carolina Press to their online collection - at no additional cost. The announcement says "The UNC Press has a national and international reputation for publishing quality books. Established in 1922, the UNC Press was the first university press in the South and one of the first in the entire nation. These UNC Press publications cover a variety of timely topics and include both current and historical titles." You can see all the titles on the HeinOnline website.
No comments:

The Library of Congress has announced that they have added the 13 volume United States Treaty Series compiled by Charles Bevans to the law library digital collection. The collection includes treaties the U.S. signed with other countries between 1776 and 1949. The LOC says that "One of the most interesting things in these early treaties is the different countries with whom the United States signed treaties, especially those that no longer exist. In these volumes you can find treaties the U.S. signed with the Republic of Texas and the Hawaiian Islands before they became states. The U.S. also signed treaties with the Orange Free States, Sardinia, Lagos, Algiers, the Ottoman Empire, and the German Republics before Germany unified."
No comments:

More on what color is your CFR...

There's a post on the Federal Register blog about how they choose the new color that the CFR will be every year.  It's from 2015 so it's talking about the 2015 color, Pantone 355U green. 2016's is blue but I don't know the Pantone code for it...
No comments:

This morning one of the Uber self-driving cars was spotted on Forbes Ave. in Oakland. 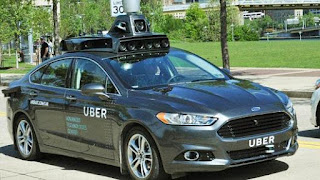