The Digital Inspiration blog provides useful instructions on fairly painless ways to find free books for your Kindle and other ebook readers. The information includes websites that provide free copyright-expired books as well as tips on finding free Kindle books on Amazon by using search functionality on the Amazon website or using the Hundred Zeros website, a "frequently updated catalog of best-sellers that are free on Amazon". You can also see what books are currently free on the UK's Amazon site... but sadly, you can't "buy" them if you are in the U.S.
No comments: Links to this post

Take the numbers out of your FB page

Benjamin Grosser has created a web browser extention called the Demetricator that removes all the numbers on your Facebook page. The Facebook interface is filled with metrics that measure and display your social value and activity by enumerating friends, likes, comments, etc. Benjamin explains: "No longer is the focus on how many friends you have or on how much they like your status, but on who they are and what they said. Friend counts disappear. ’16 people like this’ becomes ‘people like this’. Through changes like these, Demetricator invites Facebook’s users to try the system without the numbers, to see how their experience is changed by their absence."
No comments: Links to this post

Obtaining an up to date Federal statute in its section-by-section statutory form rather than its codified form in the U.S. Code can be a daunting task. Recently, however, the Office of the House Legislative Counsel has made available, on a site called Statute Compilations, selected compilations of public laws that are frequently requested. On the site, in PDF format, are some three hundred, recently updated public laws, which are either not in the U.S. Code or are part of a U.S. Code title that has not been enacted into positive law. In the site's alphabetical list of public laws are many of general interest including the very large Social Security Act broken up by title. The site cautions that these documents are not official and should not be cited as legal evidence of the law.
hat tip: Rich McKinney, Federal Reserve Board Law Library
No comments: Links to this post

It's that time of year - mid-semester - when stress levels in law students start to get really high. There is a new online resource called LawLifeline, launched by the Dave Nee Foundation and the Jed Foundation, organizations serving law and undergraduate students with mental health issues.  LawLifeline is full of information tailored to a law school student’s emotional health needs. The web site features articles about topics ranging from what makes law school so stressful to how to manage a mental health condition. Users can find information about diseases and disorders including depression, suicide, anxiety and substance abuse. The site also offers an anonymous diagnostic screening tool created with Duke University to help users gauge whether they or their friends have symptoms of a mental health disease or disorder.
No comments: Links to this post

The library at the University of Virginia has an exhibit online that celebrates 100 years as a Federal Depository Library. It showcases some of the first documents it received as a federal depository: since WWI broke out soon after, the Government Printing Office (GPO) printed and distributed posters, thrift flyers, educational materials, ads for Liberty Bonds, and other materials to encourage the “Army of 100,000,000” that would eventually win the war. Posters and publications promoted and supported women’s and workers’ roles in the war effort, Liberty and Victory Loan drives, and food and fuel conservation, and can be seen on this interesting exhibit.
No comments: Links to this post

The Chronicle of Higher Education reports on the opinion handed down yesterday in the HathiTrust case: Judge Hands HathiTrust Digital Repository a Win in Fair-Use Case.  In the case, The Authors Guild and other author associations challenged the legality of the HathiTrust digitization program and sued the schools participating in the program, including the University of Michigan, University of Wisconsin and Indiana University.  According to NYU Law professor James Grimmelmann says that the HathiTrust won on every substantive copyright issue:


Prof. Grimmelmann also comments that "this opinion together with the Georgia State e-reserve opinion and the UCLA streaming-video opinion strike me as a real trend—universities making internal technological uses of copyrighted works are doing quite well in court of late. Something significant in judicial attitudes towards copyright, computers, and education has clicked into place".
No comments: Links to this post

Table of Classifications for Pub. L. 112-181 to 112-183, 112-186, and 112-188 to 112-195 are now available on the website of the Office of the Law Revision Counsel (uscode.house.gov). When you visit the website you will also see a link to the beta version of the new and improved (and long overdue!) website. The beta version includes not only the same content with an updated look, but additional pages that explain both the US Code and the codification process. Worth a look. 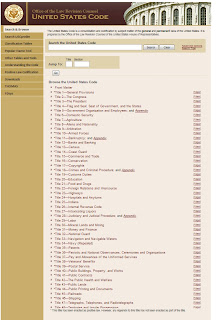 Beta new website for the Office of the Law Revision Counsel
No comments: Links to this post

The folks at Hein presented a "What's New in HeinOnline" update session at the July AALL conference. If you missed it (or if you want to see it again) they have recorded and posted an encore video presentation of the session available to everyone online. The one-hour presentation is designed to allow you to work through  at your own pace. Links are embedded throughout the presentation to allow you to focus in on areas that are of most importance to you; or you can  watch the whole presentation. Hein will also conduct a live "question forum" on Facebook and Twitter on Tuesday October 16th from 2:00-3:00 p.m. EDT when you can ask about the new content on HeinOnline.
No comments: Links to this post

The Pennsylvania state Superior Court will begin posting all unpublished memorandum decisions on its website in the "very near future," according to President Judge Correale F. Stevens in an interview with Law Weekly. He said that the court's technology department is working on the matter and the goal is to start posting opinions "definitely by the end of the year, but it may even be sooner than that." The announcement comes a little more than a year after the court began identifying the authors of its memorandum decisions. Eventually, the demand from Pennsylvania lawyers and members of the public to post the decisions led to a consensus to post them. "We're trying to be as open and responsive to the bar and public as we can be," Stevens said. "I just hope the bar understands there are going to be a lot of memorandums." In 2011, about 95% of the decisions were unpublished: according to statistics on the Superior Court's website, the court issued 4,879 unpublished memorandum decisions versus only 278 published opinions.
No comments: Links to this post

Bloomberg has published a report online called "Untangling FOIA: An Analysis of Obama's Open Government Pledge."  The article states that "On his first full day in the White House, Barack Obama promised to 'usher in a new era of open government' and ordered officials to be more transparent with the public they serve. An investigation to test that pledge shows that many of the president’s own appointees haven’t met those goals. In June, Washington-based reporters at Bloomberg News filed requests under the Freedom of Information Act for the out-of-town travel records for fiscal year 2011 for Cabinet secretaries and top officials at 57 major federal agencies subject to the law. Only about half of those contacted provided the records and costs."  The article includes helpful interactive graphics, including a video that explains what the Freedom of Information Act (FOIA) is.
hat tip: bespacific
No comments: Links to this post

The Chronicle of Higher Education has a troubling story today titled "Fake Peer Reviews, the Latest Form of Scientific Fraud, Fool Journals."  The article reports on a number of incidents in which authors got to critique their own work by suggesting reviewers with contact email addresses that belonged to the article author, and then writing "peer reviews" of their own work using another name. Apparently there have been about 30 papers to date that have been retracted because of peer review fraud. The Chronicle also reports that "What's worse, said Ivan Oransky, co-publisher of the blog Retraction Watch, which first uncovered this pattern, is that some editors saw red flags but published the papers anyway. Later retractions don't undo the harm created by introducing falsehoods into the scientific literature, he said, noting that some of these papers were published years ago and have been cited by several other researchers."
No comments: Links to this post